Successful leaders have always been aware of the power of defining moments.

FMOT - First Moment Of Truth is just before the customer buys.

SMOT - Second Moment Of Truth is when the customer first begins to experience what they’ve bought.

And Brian Solis captured a hallmark of our age with UMOT - Ultimate Moment Of Truth is when the customer shares the experience.

“We have 50,000 moments of truth every day.” said Jan Carlzon, former CEO of Scandinavian Airlines, in his famous book ‘Moments of Truth’

For me it’s EMM - Every Moment Matters, and particularly personal moments of truth.

This is what Appreciative Leadership is all about.

If you mess up one moment, you can get back on track in the next.

If you make a mistake in one moment, you can immediately learn and act on your learning in the next moment.

If you say the wrong thing in one moment, you can make amends in the next.

One of my favourites from him below 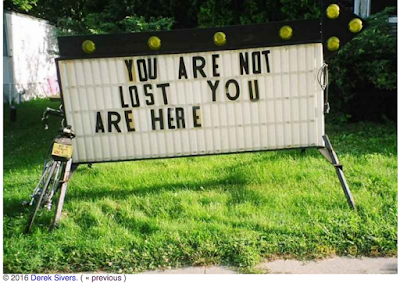 Whenever I feel like I've lost my way, or I'm uncertain about what's next, I reflect on the above and then this 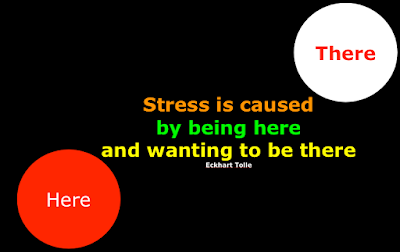 Then I get back on my horse through this 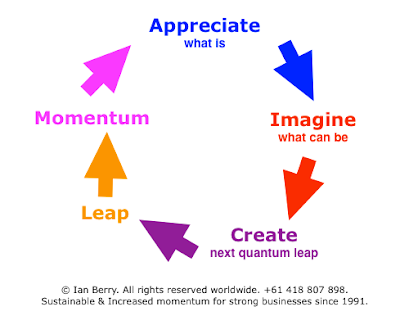 One quantum leap at time is the best way that I know of to regain or sustain positive momentum. 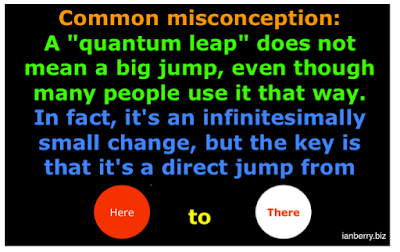 The great thing about small jumps from here to there is that when we mess up we don't get hurt, and can learn from the failure moment. 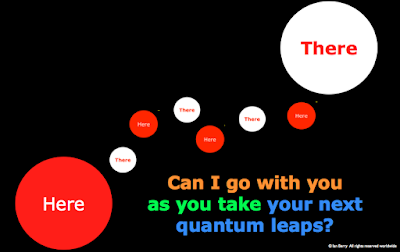 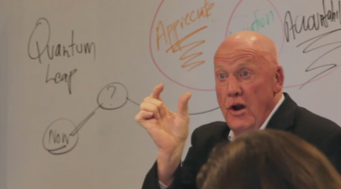 There are many great insights (all around the general theme of purpose) from the speakers in the video below. My favourite is from 51 minutes where Chip Conley, currently Global Head of Hospitality at Airbnb, speaks about the purpose of your business ("at work") and the personal purpose of employees ("in work").

Because my clients lead purpose driven businesses I am privileged and honoured every week to see the powerful positive impact that alignment between business and personal purpose has.

To ensure 2017 is your best year yet I highly recommend doing work that better aligns the purpose beyond profit of your business with the personal purpose of each of your employees.

Resolve rather than resolutions are the key to your success

2016 ends in 6 sleeps and many people will then make New Years resolutions.

On New Years eve I hold a little ceremony where I express gratitude for the remarkable, the great, the good, the bad, and the ugly, of the past year.

Then I reaffirm my reason (purpose) for being, and review my plan for the first 90 days of 2017.

I learned from Jim Rohn there's a fool-proof formula for success and it takes resolve to follow it not resolutions.

Be remarkable.
Ian
Posted by Ian Berry at 08:32 No comments:

This is a guest post from my mentor and friend Winston Marsh.

Whatever you've already decided you'll do next year, or if you're still doing some deciding, I reckon the following advice from Winston is highly valuable. 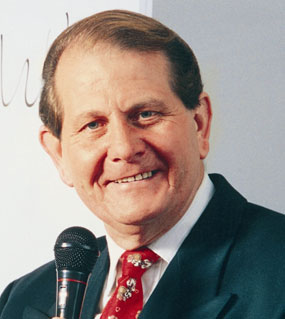 So in business you must change your thinking and…

Do what others don’t do!

If you do what others don’t do you’ll get the results that others don’t get. You’ll get sensational profits, great staff, fantastic customers and premature retirement to the beaches of the world.

Let me warn you that adopting this step, doing what others don’t do, isn’t easy… at first.

I call it the “loneliness of leadership”.

You know what happens. You go to a seminar or read a great book and you roar into your factory, shop, office and tell the team, “Things are going to be different around here.”

They’ll immediately respond with, “You can’t do that…”

You’ll ask, “Why not?” to which they will smugly reply, “Because nobody else does it.”

And that’s the opportunity…

So, when somebody else tells you it can’t be done because nobody else does it, learn to respond this way. Shake your head backwards and forwards in agreement and slowly say “Go-oo-oood… now we can get results that other people don’t get”.
Posted by Ian Berry at 08:00 No comments:

It's not about technology, rather enhancing the human experience

The following headline from an article by Andrew Lafontaine, General Manager, HCM, Oracle Australia, grabbed my attention - 'Disruption and innovation come from collaboration, not technology.'

You can read the article here.

Is the focus in your business on technology or how technology can be used to enhance the human experience of your employees, customers, and all your stakeholders?

Your answer to this question will be a key to your success in 2017 and beyond. 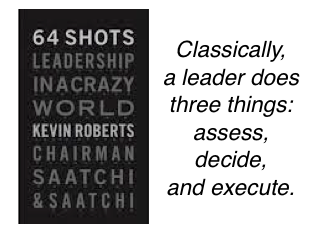 What I see over and over is leaders spending far too much time, energy, and money assessing and deciding, and nowhere near enough in executing. And worse, no agreed, transparent decision-making process being followed.

The consequence for such leaders is being run over by your competitors because they were quicker than you in assessing and deciding. And, they’re executing, while you’re still contemplating. You never catch up. Suddenly you’re out of business.

“How did you go bankrupt?
Two ways. Gradually, then suddenly.”
Ernest Hemingway in The Sun Also Rises

1) Before you take a break ask your employees for feedback and feedforward about your assessing, deciding, executing.

2) Some time before you return to work, schedule an hour by yourself to develop an improvement plan and execute it from the moment you're back at work.

Founder The Appreciative Leader Community
Helping business owners and leaders increase the positive difference your leadership makes, and to create more leaders in your business.

A one-of-a-kind bespoke leadership elevation experience just for you and your leadership team awaits. Find out more and apply from here.

This is an excellent article by GE's Beth Comstock.

The best leaders I witness behave as Beth does:

In my own work as a manager at GE, I make it a regular practice to ask my colleagues to tell me something they think I don’t want to hear, and then I take action to address it and communicate back what has changed. It’s valuable not just because of the new information I learn, but because it reinforces a culture of openness.

The future workplace (possible right now) is beautiful and effecient

This is a very insightful talk on the future (possible right now) workplace.

For the tenth consecutive year I'm thrilled to be a part of Gihan Perera's Expect More ebook along with 19 other writers. 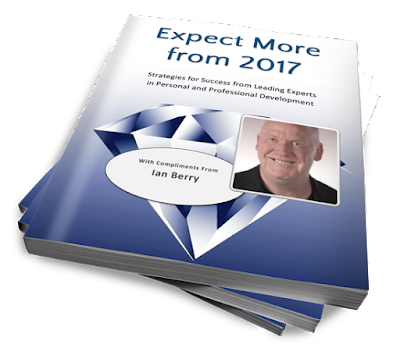 My contribution 'Why accountants, lawyers, and engineers, rarely make remarkable leaders' is on page 6.

Be remarkable
Ian
Posted by Ian Berry at 08:00 No comments:

Silence and Solitude Are Keys To Your Creativity

Innovation of course is preceded by creativity.

Often we equate creativity with being busy and active.

Yet silence and solitude are actually paramount.

Over the next month make time for silence and solitude and then as you begin 2017 make both habits.

This great TED talk by Susan Cain will help you

Joy is an inside job

One of my all time favourite speakers is Amanda Gore.

Invest an hour with Amanda by watching the video below. I reckon you'll then have actions you can immediately take to bring more joy into your life. 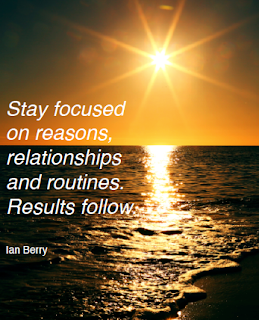 I have a gift for you on the subject above.

It's a 4 videos and a workbook, mini leadership development experience, that will yield you maximum results, when you take action in your own best way.

It's all here waiting for you.

The Power of Positioning

Who do you serve? What is the value you deliver to these people that they demand, desire, and feel that they deserve?

Your carefully considered answers to these questions determine your positioning in the market place. 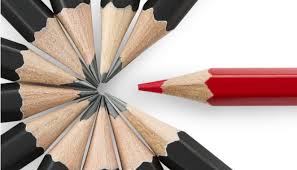 In my case I only work with enlightened business owners and leaders. I make this very clear by making the following statements visible, and crystal clear when I meet with prospective clients.

Enlightened business owners and leaders are salt of the earth people who put the delivery of value to other people (employees, customers, all stakeholders) ahead of profits.

You understand profit is not a reason for being in business, rather a result of being good at business. Paradoxically of course you make more money!

As all elite sports people do you engage mentors or coaches to help you to enhance your gifts. You fully appreciate that although you do the work, you cannot do it alone.

You understand that you’re actually in the differencemaking business. Your product/s and/or service/s are important, what really matters though is the difference they make in the lives of other people.

You’re committed to building and growing a 21st century business where employees feel valued, live values, and deliver value that other people demand, desire, and feel that they deserve.

Who is your ideal customer/client?
Are you truly focused on serving just them?

Choice is a powerful gift

Viktor Frank chose joy in the most difficult of circumstances.  While a prisoner in Auschwitz where over one million people died he wrote:  ...