In this sparkenation conversation Allan and myself explore trust and trustworthiness and how integral they are to human being centred, wise conversations.

Below the video on YouTube are links to the previous eleven conversations.

A great meditation to increase well-being

I personally find this a great meditation to increase well-being 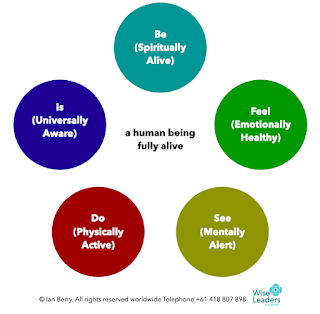 Breathe in love, breathe out fear.

Breathe in appreciation, breathe out not noticing.

Breathe in happiness, breathe out sadness.

Breathe in harmony, breathe out discord.

Breathe in care, breathe out disregard.

Breathe in compassion, breathe out lack of empathy.

Breathe in kindness, breathe out indifference.

Breathe in health and vitality, breathe out disease and dis-ease.

Breathe in peace, breathe out war.

Breathe in true self, breathe out ego (e.g. attachment to things, expectations and outcomes).

Breathe in abundance, breathe out scarcity.

Breathe in joy, breathe out misery.

Try it. You have everything to gain and nothing to lose.

Be and become the wise leader you want to be.

5 key ways to sustain your well-being

I'm excited to release my third video playbook. You can download it here. 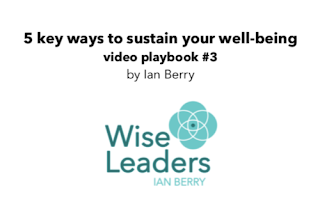 It contains a 13 minutes and 42 seconds story that I shared with a We Need To Talk Group. It's all about what I believe are the five fundamentals that you can adopt in your own best way.

There's a podcast version of this video here.

Are central bankers lost in a fog of flawed thinking?

The famed English economic historian Adam Tooze predicts that the current policies of central banks and governments will be marked in future textbooks as a “classic moment of failed technocracy”.

I personally subscribe to Adam's 'Chartbook' newsletter. I highly recommend it.

The Guardian article by Robert Reich 25th September 2022 'Corporate greed, not wages, is behind inflation. It’s time for price controls' is a sobering read. I believe it's on the money. Corporate greed is the largest elephant in the room. Read the full article here.

There's overwhelming evidence of profiteering by corporations from the misery of people.

The following is just one of a zillion examples. In a Forbes May 12th 2022 article about food companies (the top ones of which are either food processing or beverage companies!), "soaring inflation has kept the food and beverage industry growing around the world. The tops 25 companies had 1.5 trillion in revenues in the past year, and profits of 155 billion.

Don't get me started on fossil fuel and energy companies! Here's a bit of a taster 'What does government support for fossil fuel subsidies cost our economy and environment?' an ABC News article by Antony Funnell. Read the full article here.

In the United Kingdom of course they have gone back to the failed theory of 'trickle down economics'. Dear oh dear. Any reading of Friedrick Hayek, the father of neoliberalism which promotes this nonsense makes me scratch my head that such ideas ever saw the light of day.

More about this in a wonderful article by George Monbiot about the United Kingdom's government idiocy 'Environmental destruction is part of Liz Truss’s plan' Read it all here.

He concludes with this "We should see Truss’s government as an experiment: what happens when neoliberal ultras, schooled by the dark-money think tanks, get everything they want? Result: the economy falls off a cliff, while the fabric of the nation is ripped apart. Conclusion: we should never again let such people near government."

According to RUOK 4 out of every 10 Australian's are suffering stress due to cost of living pressures (apologies I didn't record the sources of this).

Despite all of the above evidence central banks still pursue raising interest rates as their solution to combat inflation. Please Australian Government accelerate the enquiry into the Reserve Bank and get rid of the entire board ASAP, replacing them with people who can think outside the box and come up with multiple solutions that stop punishing people.

And please Australian Government take action now to stop greedy corporations from holding the people to ransom. Start by collecting tax that is overdue and backdate for as long as feasible. Share some of the windfall with people to ease cost of living pressures and help get us back to being a society that includes an economy, not an economy that includes a society.