What is 'good governance'?

I'm asking my Twitter friends What is the role of the federal government? So far no clear answers.

It seems to me that we have unqualified people making decisions that effect everyone's future. We the people need to change the role of government.

In the case of the Federal government in Australia I believe they are guilty of ideological overreach.

I believe we need to adopt a form of Athenian democracy as an article by Gareth Hutchens clearly demonstrates 'If Australia was more democratic, would its economic policies be better?' Of course women and slaves would need to be included, unlike in Athenian times. Today there should be no slaves. In reality according to some there are more than 40 million. The bottom line is we are nowhere near being a democratia which means people power.

As I found the above article I began researching governance. I've been engaged in eight boards in my career including three as the Chairperson. It's been a while though and so I am a little out of touch.

I googled governance and found the following first:

Governance has been defined to refer to structures and processes that are designed to ensure accountability, transparency, responsiveness, rule of law, stability, equity and inclusiveness, empowerment, and broad-based participation.

In my view my federal government is failing in them all!

In an article for The Age over the weekend respected journalist  Jon Faine said "The spin that seems to characterise every waking moment and every utterance from this PM is made worse by muddying of the waters by the bureaucracy."

I think that this says everything we need to know about why the Prime Minister and LNP must go. The Public Service is supposed to be independent.

What is 'good governance' to you?
What is the role of government in your view?

Please email ian@ianberry.biz with your insights. They will help me as I complete my research into a new book I am writing about shared-view. 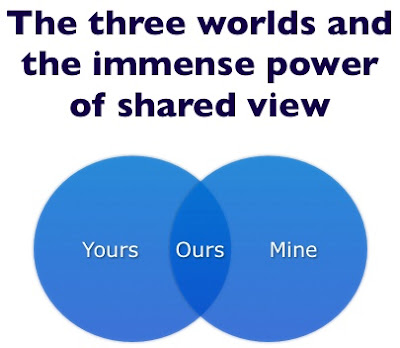 We need to move on from my way is the only way or authoritarian governments, and all forms of fundamentalism and instead lead through a shared-view.

Most of our troubles, personal, local, organisational, national, and international, are fundamentally based in our perceived need to hang onto the world in here (my view), our issues with the world out there (other people's views), and, our failure to focus more on the world we share (ours).

The exciting news is that when we find and sustain shared-view (ours) we can triumph over all our troubles.

Become the wise leader you want to be.
Ian