This video is a preview of the upcoming season two (June and Sept 2022, and February and April 2023) of my signature online program We Need To Talk.

There are many insights that you can immediately apply in your own best way.

Here's the 6 minutes and 44 seconds podcast of this post. This video is 7 minutes and 55 seconds.

The talk about hybrid work has confused the issues. Hybrid and what it stands for are only half the story.

Mary (not her real name) is a long term employee for a highly successful business. I know her well having worked with her for over a year. Recently Mary went from having a great boss to one who resembles the old command and control type who believes people need to be managed. She told Mary in a first 1:1 that she doesn’t fit future requirements and may have to consider moving to another team. Mary is high performer loved and trusted by her team mates so I am mystified by the new boss and her attitude.

This scenario is typical of what I call industrial revolution hang over.

I’m appalled by the talk and writings about a second, third, fourth and fifth industrial revolutions. The language is entirely inappropriate for the 21st century given in my view that the industrial revolution between 1760 and 1840 dehumanised work and we have not yet fully recovered.

We must humanise the workplace. Key are human centred conversation and human being centred workplaces which I will come to in a minute.

I’ve been in the room with more than a million people since 1990 and I can vouch that we are better at leading people and managing process than we were then, yet still there are a significant number of places where people are referred to people as resources, assets or capital, all terrible and demotivating descriptions of one-of-a-kind human beings that each of us is.

John (not his real name) is a long term employee who I have worked with over a five year period. He is an excellent leader, loved and trusted by his team mates. Recently while working from home he was forced, along with all of his team members, to sign-off from work to go the toilet and sign back in again. This kind of distrust of people is rife in workplaces where command and control people management still exists.

John and his team have been forced during covid-19 to attend numerous, useless meetings, that have wasted people’s time and energy and further decreased trust in bosses.

You can see a theme here bad bosses. We know from an immense amount of date that 7 out of 10 people leave their bosses rather than their workplaces.

Sally (not her real name) is a senior executive who I have worked with for more than a decade. Despite above average performance and making a significant contribution to her company’s success, and wealth, recent hiring of new members to the team have worked under instructions from the higher boss to undermine Sally and force here out. This is one of the worst cases I have seen of not living the agreed values of behaviours and shifting to a for profit purpose business rather than a for people business.

Profit is not a reason for being in business, rather a result of being good at business.

There is overwhelming data that shows that for people business making significantly more profits than for profit businesses. Slowly for profits businesses are becoming dinosaurs yet there are still a number of greedy people driven by self-interest and ego.

Those succeeding and getting through the covid-19 cloud are having less meetings about compliance and more human being centred conversations. There are none essentials to such conversations. 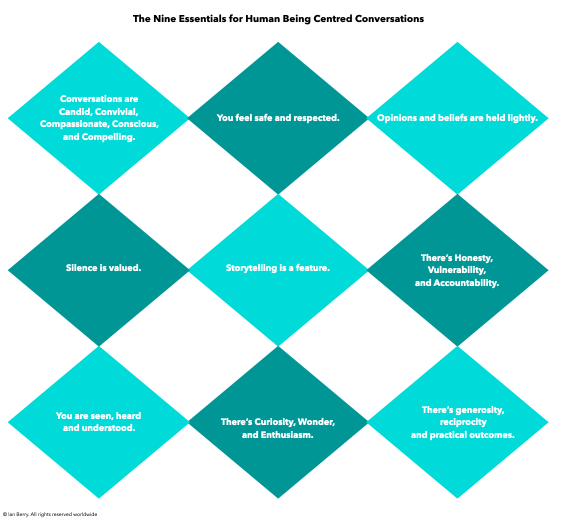 These kind of conversations cause sparkenations. A sparkenation is a spark that ignites passion that leads to action that changes what’s normal.

We crave conversations that stir our hearts, shift our thinking, and inspire us to be and do differently. Such conversations feature engaging language which elevates the conversations which in turn enriches relationships, the lifeblood of everything we are and do as humans.

The power of these conversations is that they are a catalyst for meeting deep human needs:

Here's a previous video and post about human being centred workplaces.

PS One thing I forgot to mention in the video and podcast is the Buckminster Fuller insight long ago that not everyone needs to work. Google Universal Basic Income, read a wonderful book by Yanis Varoufakis about what's possible.

“We keep inventing jobs because of this false idea that everybody has to be employed at some kind of drudgery because, according to Malthusian Darwinian theory he must justify his right to exist. So we have inspectors of inspectors and people making instruments for inspectors to inspect inspectors.”