Jack's Story and the gift of farsight

My thanks to Terry McGivern, Peter Milligan, Richard Merrick, Liviu Caliman, and Claudia Brose for being in the room for what was the final episode in season one of We Need To Talk.

Jack and I used to imagine being eagles and being able to fly anywhere.

In Sept and October 2021 I was forced to spend 10 days in hospital after my system crashed in response to immunotherapy. (the good news is that along with radiotherapy, the treatment worked).

I played one of my favourite songs 'Up Where We Belong' the Joe Cocker & Jennifer Warnes version, many times.

In meditation I go to what I call my FarSight place. There's no bias, prejudice or conspiracy theories in FarSight land.

This is the place where I can see possibility with crystal clear clarity and see who I need to become and what I can do next.

Farsight is a place of where there are no limitations and no feeling feelings limited.

Many people showed care and compassion in all kinds of ways while I was in hospital. One colleague in The Right Company Con Christeson saw me with an eagle and so I was overcome with joy when she let me know.

On the next day I drove fifteen hours only stopping for petrol and food. There's a straight stretch of road for about 150 kilometres. I was 'flying' along this stretch when I saw what seemed like a dark black cloud over the highway just ahead. As I slowed down and came to a stop I was amazed at what was in front of me - a giant wedge-tailed eagle with wings fully extended (about 2 metres wingspan) lifting a kangaroo carcass off the road. 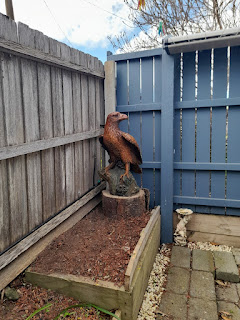 Now every day I get the opportunity in the morning sunlight to meditate in the land of farsight with help from Jack.

Most recently farsight has led me to modify and nuance how I show up in the world. I'm taking myself less seriously. I've changed my behaviour in how I respond to things that piss me off. I still have strong opinions, I'm holding them lightly and sharing them very differently.

As a consequence of farsight I'm getting better at keeping my mouth shut and my heart and mind open when I'm in conversation with other people.

In April of 2021 Carol and I holidayed with our son Lukas and daughter-in-law Sarah on Kangaroo Island where they have a holiday home. We visited Raptor Domain while there and I was able to hold onto this eagle. It astounded me in one way yet not in others that this eagles name is Jack. 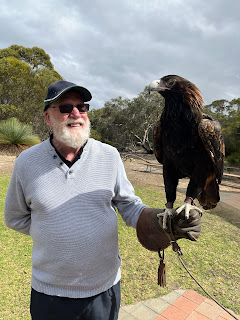 Email ThisBlogThis!Share to TwitterShare to FacebookShare to Pinterest
Labels: Jack the eagles, Jack's story Farsight We Need To Talk