No news really is good news

I long ago stop watching the nightly news on commercial television. I got tired of their bias. Recently I have stopped watching the news on non-commercial channels too. Every night same old story; who’s killing who, political bias, buffoonery, and blatant lies, what’s bad for you, obligatory stock market report showcasing the greedy on wall street and irrelevant for most on main street. You get the distinct impression that we live in a horrible world. There’s a saying in journalism apparently that says “if it bleeds, it leads”! Well I’ve had enough.

We don’t live in a horrible world. Sure in some places some people are doing horrible things to other humans and our planet. Not in my world.

In my world there is love, kindness and caring. Good news in my world far outweighs the bad. There are many things in my world that I can control; my intentions, feelings, thoughts and actions for starters. And particularly how I see and treat other people.

My world is nothing like the one portrayed on television news every night and in the increasing number of so-called reality shows where reality is actually missing completely.

Feel deeply as I do for all the people in parts of the world, the innocent bystanders caught up in unspeakable violence being perpetrated by the few. Do what you can, yet don’t be bribed by television news or any news that fails to tell all sides of the story or focuses on the bad news.

"There is no way to peace" A.J. Muste wrote “peace is the way.” What I do is travel the road, being civil to everyone I meet, regardless of whether they believe what I do or not. 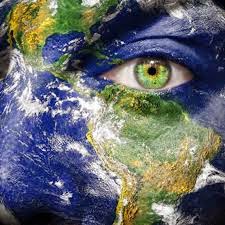 "It doesn't take money to turn off the television and cultivate real bonding time."
- Marianne Williamson
Posted by Ian Berry at 06:42