I've been watching the Australian ABC television series 'The Killing Season'. It's about how the Australian Labor Party replaced Prime Minister Kevin Rudd with Julia Gillard and then replaced her and went back to Kevin. One outcome is that Bill Shorten, a key figure in the demise of both, now leads Labor in opposition and Tony Abbott of the Liberal Party is Prime Minister. Abbott was clearly a beneficiary of the in-fighting of Labor.

Both Shorten and Abbott are in my view much lessor leaders than Rudd or Gillard. In fact there's nothing that I can see from either that suggests they know anything about 21st century leadership.

How could we end up with two weak leaders, neither of whom is the best available in their respective parties?

Clearly Rudd was smart. He was ahead of the game when the Global Financial Crisis hit for example and almost pulled off a world agreement about action on climate change. He also didn't like it when he didn't get his own way and sulked.

Lesson one. Never be the smartest person in the room. Always have people around you who can challenge your view and provide alternatives.

Lesson two. Leadership is never about your way being the only way. One of the reasons party politics is a dumb concept is that people who disagree with policy, like many do in the Liberal Party about marriage equality for example, are forced to vote against what they believe. This always ends in frustration, resentment, let alone a delay in doing what's right.

Lesson three. Be open and authentic about what you're debating. Share your disagreements, conflicts and difficulties.

Lesson four. Once you've made a decision be transparent about how you arrived at the conclusion you did. People may disagree. At least they can see the emotional and logical journey you went on.

Assuming this television show is the truth it's obvious that lot's of people struggled with Rudd's leadership style yet no-one spoke to him about it, rather they gossiped and plotted behind his back.

Lesson five: How are you receiving feedforward and feedback about your leadership? Are you and the people around you mature and experienced in how to have candid and convivial conversations about performance particularly when there's disagreement, difficulty or conflict? A no answer to these questions means you've got work to do and fast.

Lesson six: Say what you mean and mean what you say and say it looking people in the eye. This includes naming elephants in the room. I have a clear sense that had the Labor party confronted Rudd in a mature way that he was able (and I suspect willing) to change his leadership style. I reckon he would have been a good long term Prime Minister, Gillard would be now and be better than she was. And, we wouldn't have the disastrous duo of Abbott and Shorten, neither of whom can lead us anywhere remarkable in my view.

Lesson seven. Values like accountability are useless unless there's a shared-view about how they will be lived and consequences when they're not.

Lesson eight. Self-awareness is the number one leadership skill. Remarkable leaders appreciate the remarkable, the great, the good, and the bad and ugly about themselves, imagine what can be, create plans to change, and then change. Positive momentum is a consequence as is achieving what we want. 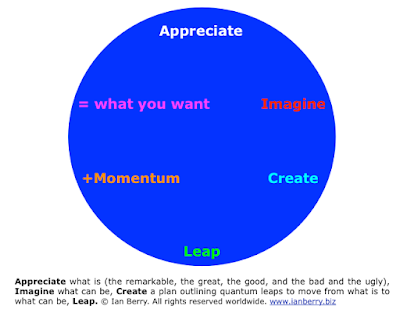 We cannot do this alone. The great paradox of remarkable leadership is that we need others, not least to hold up a mirror for us. Our part of the bargain is to see what is and then take appropriate action.