Progressives, Conservatives and Smart Cabinets. And Success and Oblivion 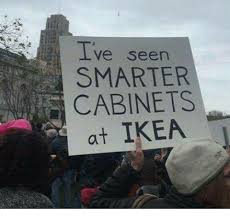 It's featured around the world in protests by our children!

Here in Australia recently our kids have been out in great numbers protesting about our Federal Government's lack of action on climate change.

And the reaction from our cabinet ministers, including our Prime Minister, has been dismissive, clearly demonstrating that they are clueless and not representatives of the people.

The Conservatives (read out of touch middle aged and older men) have the power in our Federal Government here, albeit it seems to me that they are in the minority.

Recently these fools got rid of our previous Prime Minister (a progressive) despite their own polling suggesting they could win the next election.

The Federal Government here is made up of members of the Liberal and National Party who both once upon a time were known for being progressive and conservative. Not anymore.

By contrast the State Government in my home state of Victoria, is made up of people from the Labor Party, see my previous post about them. These folk have stolen the progressive ground and will win the next Federal election in a landslide unless they make a big mistake beforehand.

In your workplace you must be progressive and conservative while fully understanding and delivering what all your stakeholders really want. If you're not being and doing this you face oblivion.