Hear your heart before listening to your head

Listen to the podcast version of this post here.

This is the second in a series of nine about the future ready skills of Response Ability. Here's the first post on Farsight. 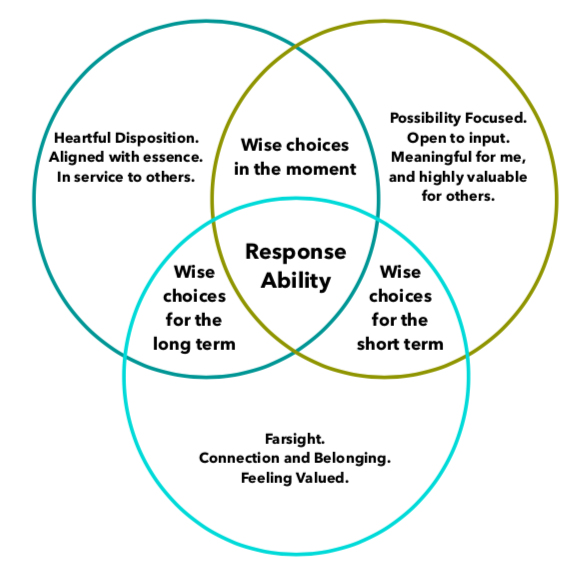 I regard Response Ability as the keystone character trait of #wiseleaders. Response Ability is your ability and willingness to make the wisest choices for your own and other people's well-being in the moment, as well as in the short and long term.

Our minds are full of stories we told ourselves. Patterns, biases, beliefs and values are some of the consequences. In the moment and in the short and long term we respond or react based on our stories.

There's a better way to live, learn and lead than reacting.

My book Heart-Leadership has this premise - To sustain being in harmony with yourself, other people, and our planet, we need to consistently hear our hearts first, ask our heads for help second, and engage your hands third. This all takes a lot of deliberate practice before it becomes habitual.

“The only thing that keeps us down and keeps us stuck is our thoughts.” said the Canadian writer John Kehoe.

Reading John’s insight in 1990 was a game changer for me.

My heart was telling me then that I should leave the corporate world and begin self-employment.

I felt my heart calling me to be more than I was and to do work that I felt could better serve people.

My head was filled with doubts and worry and thoughts that I was putting my family at risk should it not work.

The expressions ‘doing my head in’ and ‘weighing heavily on my mind’ had a lot of traction.

I followed my heart yet I was full of fear.

Fast-forward 32 years and I am still following my heart. There’s been highs and lows and lots in between.

There have been times when I allowed my head to overrule my heart. The consequences were never good.

There have been times when I followed my heart, only to allow myself to be overcome with doubt and worry and quit too soon.

Equally allowing my head to rule has also meant hanging onto things for way too long.

Always my life has been better when I have followed my heart, kept a cool head, and move forward with my hands one small yet significant step (quantum leap) at a time.

My deepest insights into to the matters of, and the preeminence of the heart, began on September 15th 2017. My wife Carol received the exciting news on this day of her registration as a civil celebrant.

On the same day she received the news after many tests that she had cancer of an unknown primary (about 30% of cancers) that had metastasised in lymph nodes in her neck and chest cavity.

In the next five months she lost her energy, her hair and almost her life.

I became her primary carer. To say that our lives were changed forever doesn’t do justice to what happened.

A few days after her first chemo treatment, which involved five hours sitting while being injected with drugs, we were in our lounge room watching TV.

I happened to glance at Carol only to see her eyes rolling and her losing consciousness. I called the hospital emergency number given to us and there was no answer. I then called the ambulance emergency line to be told by the operator to slap Carol hoping to wake her and then to keep her awake until the ambulance arrived.

I followed instructions and with great fear experienced the longest 19 minutes of my life with Carol barely conscious when the ambulance officers entered our home.

After connecting Carol to machines and getting her to stand her blood pressure dropped 30 points and they explained to me that they would give her some drugs to stabilise her and then take her to hospital.

As they wheeled her to the ambulance I burst into tears and felt an acute loss of energy only to be reassured that everything would be fine.

A hour lately when I got to see Carol in the emergency ward she had recovered quite a bit. It was explained to me that she had had a severe reaction to the chemo drugs and required a hospital stay for a few days to recover.

We learned in the next few months that Western doctors know about chemicals and trauma recovery. In the main we learned the hard way that they know very little (with few exceptions) about human energy and human well-being.

Carol got well primarily through her own resilience. She enhanced her gift of being able to learn about all the options and choose what resonated with her heart.

In essence over time Carol changed her energy vibration/frequency with the help of changed diet, exercise regime, and the use of sound waves and frequencies through rife and scalar machines.

Of course I benefited greatly from the numerous conversations we had and continue to have. I participated too in the changes Carol was making in my own best way.

These conversations, observations and changes prepared me well for my own cancer battle and enabled me to change my energy vibration/frequency as well.

Fast-forward to now and I can report a sustaining of what I have come to call Heartful disposition which I describe as "I hear and follow my heart first and engage my mind second."

To get to sustaining Heartful disposition myself I had to tell my mind (out loud) to shut-up for several weeks before hearing my heart first became a habit. This was despite over forty years of practice through meditation in quietening my mind!

Heartful disposition is a key to responding wisely in the moment. My daily inspiration is these words attributed to Viktor Frankl yet probably not his words (see my backstory here).

Between stimulus and response there is a space.

In that space is our power to choose our response.

In our response lies our growth and our freedom.

These wonderfully wise words are imprinted on my heart. The more I live by them ensuring I hear my heart before engaging with my mind, the more I respond to other people in ways that are uplifting for them, and the more I make the wisest decisions for myself.

I encourage you to make hearing your heart before listening to your head a priority in your life. Drop me a line should you wish to share the joy and success this brings you.

PS please note that there are still some places left in the special complimentary Wise Leaders Workshop in February. Two time options meaning you can participate at a comfortable time wherever you are in the world. Learn more and register from here.