The great causes of the gap between possibility and reality

This post is a follow on from this post about being possibility focused, one of the nine future ready skills of Response Ability, the keystone character trait of wise leaders. 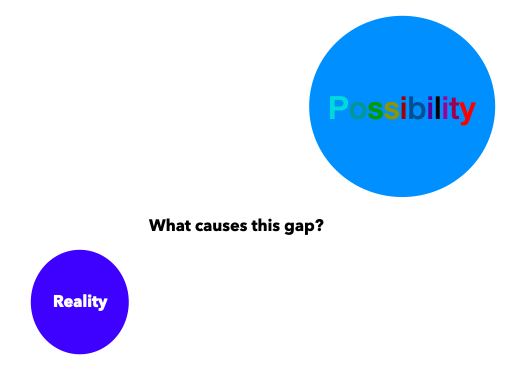 There's always a gap between reality and possibility. The more aware we are of the causes of the gap, the more we can take action to eliminate them.

Here's what I see are the great causes of the gap between reality and possibility. What would you add?

Favouring the few instead of the many.

Lack of accountability, ethics, self-leadership and leading for others/leading for leaders.

Loose with the truth.

Poor planning or no planning.

Seeking to divide and conquer.

Seeking to rule over others by creating fear of the unknown.

Unwillingness to be scrutinised.

Waiting to see what the mob does.

The sad role model of all of the above for me is the Federal Government of Australia, the Liberal National Party.

Instead embrace the pull of being possibility focused.