The BIG three to sustaining remarkable workplaces in the long term

The BIG three are pictured. Embrace them in your own way and you'll not only save a vast amount of time, energy, and money, you'll increase the number of your employees bringing their best to their work every day. You can download the three as a PDF here. 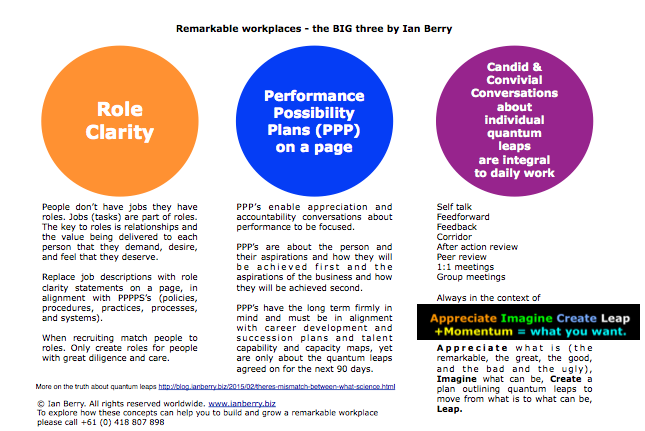 I hear business leaders complain all the time about Government bureaucracy and red tape. I get it. I also agree with an article by Christopher Niesche in the April 2015 edition of the Australian Institute of Management magazine where he says "while businesses like to point the finger at government red tape, their own red tape is actually much more costly." There is no greater example of this than performance management systems.

Deloitte recently determined that they were spending more than 2 million hours on such a system. Read more here. In my view there is no greater waste of time, energy, and money than that being spent on such systems. And they don't make a shred of difference to people's performance, in fact more often than not they negatively affect people's performance. This is because they're based on a mechanistic view of the world where people are seen as cogs in a giant machine.

In the almost quarter of a century that I have been working with organisations to remove bureaucracy it only takes 30 - 270 days (it depends on how many employees you have) to get rid of the BS associated with performance management systems and replace them with the big three where human beings are appreciated not appraised. When people feel appreciated they become more accountable. Optimum performance follows.

If want to eliminate your performance management system and immediately increase the number of your people bringing their very best to their work every day, and save yourself a bundle of time, energy, and money, then please contact me without delay on +61 (0) 418 807 898.