Putting thoughts into 140 characters in itself has been a discipline that's greatly helped my ability and willingness to be concise.

I may not be on Twitter for much longer though.

I’m tired of the lack of kindness there where some people say defamatory and cruel things about other humans they wouldn’t say in person, and are taking no accountability for their vitriol.

Be Kind; Everyone You Meet is Fighting a Hard Battle
attributed to John Watson

I had similar feelings when I left Facebook at 9.34 am on 21st April 2012. This was a significant decision. I was endeavouring to zig when everyone else (over a billion people now and counting) seemed to be zagging.

I have no regrets.

Facebook does a good thing for my mother-in-law who is 88. She loves to go there to see the latest pictures and read the stories of her grandchildren and great grandchildren on the family page. No doubt Facebook is good in other ways too. I’ve decided it’s just not for me.

My decision to leave Facebook was part of a quest to find ways to use technology in ways that I could still make meaningful connection with people who highly valued such connection, and also to avoid the plague on social media that I believe is soul-destroying for millions of people. It’s anti-social, and increasingly anti-human.

I'm currently questioning the value of LinkedIn too. I think there may be hope given the following from CEO Jeff Weiner:

I'd be interested in your thoughts about where you're at with social media and where you're headed with it. Please comment below.

I'm embarrassed to admit that I was once addicted to social-media and 'The Internet of Things' in general.

When I realised this I gradually began to wean myself off it all.

Now my time online, apart from when I'm connecting with people via Zoom (see below), or Skype, is 5 to 15 minutes a day.

I haven't quite quit social media as Dr. Cal Newport suggests is a good idea for our well-being and capacity to produce rare and valuable work.

I have, in addition to dramatically reducing my time and energy engaged in social media, mastered ensuring there’s nothing in my email in-box after 10 minutes of work first thing and last thing in my working day.

Largely I've come to believe that the internet is the biggest rubbish tip in history. Yes I accept one person’s trash is another person’s treasure. I’ve found ways to turn information into insight that my clients find valuable without wading through too much crap. This requires deep work as Dr. Newport calls it. (I'm currently immersing myself in Cal's wonderful book 'Deep Work: Rules for Focused Success in a Distracted World')

My smart phone no longer outsmarts me. Most of the time it’s switched off. I use it to make and receive phone calls, check sports results, set my alarm, or listen to music. My ipad is now just for reading books and the odd game I play to relax.

Seth Godin refers to smart phones as 'Pavlov's in your pocket' a great piece you can read here.

Zoom technology is what I now use to make meaningful connection with people who highly value such connection and want a master-mentor relationship. I’ve mastered Zoom’s use over the past 18 months and now use it for 50% of my work.

40% of my work is with people whom I meet with in person. None of them work more than an hour and a half from my home.

What of the remaining 10% of my working life? I was on a plane for only 6 return trips in 2016. My goal was 10 maximum for business, the same goal that I have this year.

I've discovered through all of the above that the internet, and technology in general, can be great to enhance the human experience, my own, and the people who matter to me. It's a matter of choosing wisely.

Some people spend too long staring at screens and not enough time engaging with life.
Paul McGee

I'd be interested in your thoughts about where you're at with social media, the internet, and technology in general, and where you're headed with all of it. Please comment below. 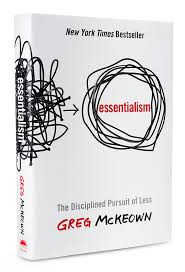 From the moment I read this great book I began integrating it's central theme of less but better into my life and work.

You can read more about this here.

The journey hasn't been easy or simple, nevertheless highly rewarding. I am now the most productive and creative I've ever been.

It is our choices that show what we truly are, far more than our abilities.
Professor Albus Dumbledore headmaster of the wizarding school Hogwarts

My choice to be really careful and selective in my use of technology, social media, and 'The Internet of Things', means I'm not just more productive and creative, I'm happier too. And, I'm delivering greater value to others.

I'd be interested in your thoughts about where you're at with social media, the internet, and technology in general, and where you're headed with all of it. Please comment below.

And that's the true danger of anti-intellectualism. While it's foolish to choose to be stupid, it's cultural suicide to decide that insights, theories and truth don't actually matter. If we don't care to learn more, we won't spend time or resources on knowledge.
Seth Godin

Apparently we are living in a ‘post-truth’ world. This is not true or acceptable in my world.