Is the art of conversation dying in the Digital Age? guest post by Andrew Thorp 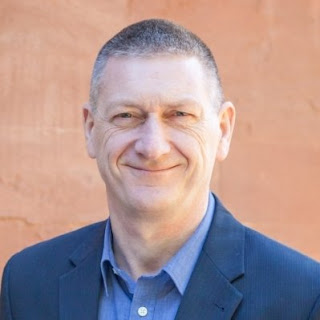 This is a guest post from my friend and colleague in the UK Andrew Thorp.

Recently in Manchester’s Northern Quarter I’ve been giving a series of talks organised and promoted through a platform called Funzing. It’s a great concept that seems to be inspired by TED talks – speakers delivering all manner of topics to engage and inform an audience, all for a modest ticket price of £10-12.

Having already spoken on 3 occasions on the topic of “What makes you YOU?” (what it means to tell your story), I wanted to explore a fresh theme and last week we ventured into a current and somewhat controversial subject - social media and its impact on our communication habits.


You might think it’s an exaggeration to claim that the art of (face-to-face) conversation is dying, but the image of people seated around a dinner table each staring at their smartphones has become commonplace in recent years – and it worries me.

So, I thought it would be interesting to address a group of people (last week’s audience were predominantly 20-30 years of age) and canvas their opinion. To my surprise, these digital natives were almost unanimous in their concern about the way that social media and online communication has come to dominate the lives of their friends, colleagues and even themselves. 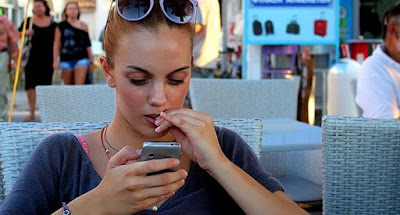 My main interest was how the ‘digital habit’ is impacting our ability to communicate effectively in face-to-face situations and I’ve been fascinated recently by the findings of academic and author Sherry Turkle. A professor at MIT in America and a psychologist/sociologist by trade, Turkle has long championed the opportunities created by digital technology, but over the years she’s become increasingly concerned that we’ve got things out of balance. 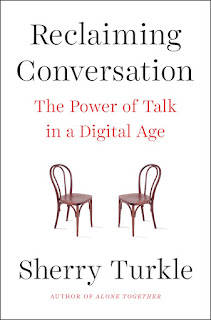 This isn’t just a gut feeling on her part; it’s supported by hundreds of interviews carried out with colleagues, students, business owners and others, all of whom have strong views when it comes to the way we communicate.

Here are some of the issues she highlights in her book Reclaiming Conversation; the Power of Talk in a Digital Age, many of which we explored last week:

Face-to-face conversations are just too scary!

The prospect of having an actual conversation leaves some people cold. They worry about the loss of control and the need to reply in the moment without the time to formulate their response, edit and deliver it when they’re ready.

The loss of empathy

Turkle interviewed many teachers who were concerned that school kids were not able to empathise with others, to properly understand how a text message or Facebook post might affect someone’s feelings. They spoke of a 'de-sensitising' effect on the kids. It’s all done at a distance; you don’t need to look people in the eye when you ‘unfriend’ them or say something unkind.

The need to be ‘on call’

Many of Turkle’s interviewees spoke of a sense of responsibility to their online network, a feeling of needing to be constantly ‘on call’, just in case someone wanted to contact them. In a sense these are conversations, but I share her concern that this need to be available leaves no time for quiet solitude, of simply being alone with one’s thoughts.

Conversations about what’s on your smartphone

Watch a group of young people around a table and invariably they’ll be sharing images and videos with each other and reacting to them. In other words, conversations are often about what’s on their smartphones. On the face of it that’s fairly innocuous – I’ve done it myself with my kids – but I wonder if there’s a danger that we’ll lose the ability to converse and tell stories when there’s a digital pre-recorded version to hand which saves us the bother.

I recall hearing an interview with a man who organised hot air balloon trips over the Serengeti. He expressed sadness that his customers wanted to record the trip on a digital device instead of experiencing it through their natural senses. One has to question the motivation for recording and sharing such footage. Like a wedding, it’s understandable to want to record a special moment for posterity. But do we simply want to feel good about the likes and shares we get by posting it on social media? Is this the way we measure our self-worth?

There was a fascinating passage in Turkle’s book about a couple of young women, quite close friends, who had an interesting interaction. One received an upsetting text from her boyfriend (a kind of ‘remote breakup’) and her friend tried to console her as they chatted over a drink. But within 5 minutes the injured party was texting her other friends (who were not present) and responding to their reactions, ignoring the friend who was physically next to her. I think it’s regrettable that she was prioritising her wider "consolation network" over the friend who was present and willing to provide her with face-to-face support. Perhaps when there are all those other people ‘out there’ we worry what we’re missing if we focus on one person.


I’m a huge fan of social media and the opportunity it affords us to voice our opinion and build influence. But I am worried that it’s squeezing out those precious moments when we breathe the same air and learn how to find a connection.

An interpersonal skill is like a muscle – if we don’t keep using it there’s a danger it will shrivel up and become ineffective. Face-to-face conversations (like the ones recorded for Radio 4’s The Listening Project) are moments to be cherished. They help us develop critical skills like the ability to:

I love this quote by actor Stephen Fry:


Conversation is the improvised jazz of the English language

The beauty of a conversation is not knowing where it will go and having to improvise on the spot. Even actors who memorise a script will point out that acting is actually about reacting – not just to the words they hear but to micro expressions, tone, body language, energy, etc. Live, interpersonal conversations help us develop these skills; they’re immensely important in interviews, presentations and other influencing situations. They build confidence and help us navigate our way through life.

Let’s occasionally put down our smartphones, engage someone in dialogue and stay very much in the moment. It’s worth it.

Andrew Thorp is a coach, trainer and consultant in the field of business communication. He works with companies both large and small, through the School of Mojo and on bespoke projects. His mission is to help leaders become more confident and persuasive speakers and to humanise and 'storify' business communication.
Posted by Ian Berry at 08:00

The joy of delivering the finished product

The video below is the 45 seconds after the first box of my Heart-Leadership book were delivered to my home. The box contained the first 44 ...