Equal opportunity and other matters of civility and a fair go

I have signed this petition about the freedom of Julian Assange. The content at the link makes very interesting reading.

In Australia we don't yet have a human rights bill. This might help to explain why our federal government seems, at least on the surface, to be missing in action when it comes to supporting Mr. Assange an Australian citizen.

My observations are that our federal government doesn't do very well in supporting people who have different views or ideologies to theirs.

Our federal government, particularly our Prime Minister Scott Morrison, don't like scrutiny either. He is actually now refusing to answer questions that put him or the government under scrutiny.

According to the article referenced at the start of this post "this petition is now the 4th largest petition to be successfully tabled in the history of the Australian Parliament (since 1901)."

Yet still Julian Assange is being treated inhumanly. As a yet there are no legal charges against him. Of course even if he had beeen charged he still shouldn't be being treated the way he is.

From reading the United Nations Declaration of Human Rights (adopted in 1948) it seems to me that we are failing Julian Assange, and many other people, and yet bullies like Donald Trump and Scott Morrison are getting their way. 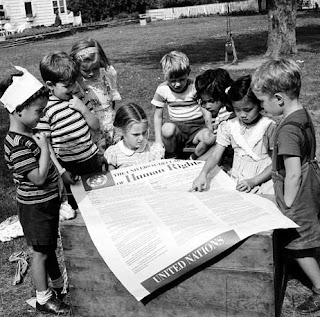 For the sake of the future of our children
What does all this mean for you?

In your workplace does everyone, regardless of their beliefs, have equal opportunity?

To use an Australian vernacular, that seems diminished of late, Does every single person in your workplace get a fair go to bring the best version of themselves to their work?