Is the farce, folly and flawed nature of fundamentalism threatening your business too?

We’ve been having in my view an uncalled for, unwarranted and totally unnecessary public debate about marriage equality in Australia recently.

I’m aware that the headline for this post or simply by making the statement above means I may have alienated you. If so you have made that choice. In my view offence can be taken yet not given.

I believe we can disagree on any number of matters and still get along just fine.

The key to working together and most importantly to living in harmony on the same planet is not what we disagree on, rather what we agree on.

If you have taken offence please read no further as things will likely only get worse for you. Again your choice.

The above is an example of candidness. Hopefully the convivial intention of it is not lost on you.

The debate in Australia has come about because our Prime Minister, who says he favours marriage equality, has been unwilling to allow parliamentarians a conscious vote because he fears offending a minority in his own party that threaten his leadership. This illustrates how the tail wags the dog in politics and how self-interest triumphs over national interest.

Not that a conscious vote should be necessary. The vast majority of people in Australia want marriage equality so the politicians should simply be making that desire the law.

Instead they bow to the farce, folly and flawed nature of fundamentalism. More classic tail wagging the dog behaviour.

A conscious vote is itself ironic given that the marriage act was changed less than twenty years ago. And as far as I can tell the changes were made in the dead of night without consultation with a majority of parliamentarians, and certainly not the people they are supposed to represent.

The act now says only a man and woman can marry. This law violates many other Australian laws because it discriminates against people based on their sexual preference. So we have an act that is itself illegal!

These are examples of fundamentalism and tail wagging the dog action. It’s a farce, folly and flawed all at once!

And don’t get me started on religious bigots. Marriage is not a religious act. According to our law it’s a civil ceremony and 70% of the time is performed by civil celebrants. Religious leaders cannot perform the legal part of the ceremony without the appropriate authority from the Attorney Generals Department.

Fundamentalism has a both a religious and a non-religious face. It seeks to discriminate against people who don’t believe the same thing that the fundamentalists do.

Be careful because fundamentalism could be threatening your business too.

You can tell if this is the case by listening into communication and conversations and gleaning whether or not assertiveness is a characteristic of your culture.

Aggressive behaviour says “my way is the only way, my way is better than yours, or there'll be serious consequences if you don't do this. These are all bully behaviour.

Submissive behaviour says “your way is better than mine.”

Assertive behaviour respects your view and mine and then works towards ours. 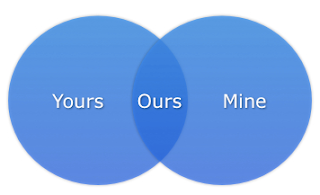 Stephen Covey called Ours the Third Alternative. It’s a very powerful way to feel, think and live. It enables the holding of opposing views in the mind at once and making decisions that are in the best interests of the majority without harming anyone in the minority.

Most of our troubles, personal, local, organisational, national, and international, are fundamentally based in our perceived need to hang onto the world in here (my view), our issues with the world out there (other people's views), and, our failure to focus more on the world we share (Ours).

The exciting news is that when we find and sustain shared-view (ours) we can triumph over all our troubles and thrive in any circumstance.

In your business (and any relationship of high value and mutual reward) shared-view matters in seven areas:

1. where we are (reality)
2. where we're going (possibility)
3. why we're going there (purpose)
4. how we will get there (strategy)
5. who will do what and when (execution)
6. how we will know we are on track (milestones and lead measures)
7. how we will behave along the way (culture &values)

I’m hosting a complimentary candid and convivial conversation online on 16th October 2017 about these seven areas of significance where the most successful leaders stand out and other really useful models for building and sustaining remarkable workplace cultures. You can register here. Places are limited to enable conversation. All views are welcome.

The above is not a webinar rather a conversation. There will be no boring voice over slides, silly slogans or anything for sale.

PS The High Court in Australia ruled last Thursday that the Government's proposed opinion poll about marriage equality can go ahead and therefore we all get the chance to say yes or no. I personally believe that doing so is an insult to people who love one another and want to get married.

Nevertheless I will vote yes and hopefully do my bit to end the farce, folly and flawed nature of all of this.

I've found it fascinating that those who want a no vote are suggesting that this is about political correctness, freedom of speech and religion and even about the welfare of children.

Beware of this kind of thing in your business. Hyperbole, just plain hype and obvious red herrings are all subtle forms of bullying.
Posted by Ian Berry at 08:00

Heart-leadership is a choice. Thankfully we're seeing more and more of it of late. And thankfully too we're seeing less of the hea...