Is it time to realize your stupid idea? 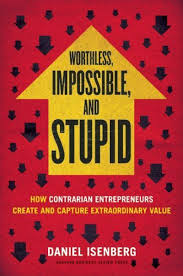 I am currently reading 'Worthless, Impossible, and Stupid - How Contrarian Entrepreneurs Create and Capture Extraordinary Value' by Daniel Isenberg.

It is a great read with many wonderful insights like
"most value is in the realization, not in the recognition."

I am sure you have an idea that is yet to be realised.  Many have told you it won't work and so you have shelved it.

One of the many great case studies in the book is about Local Motors whose founder Jay Rogers says "If everyone tells you it is a good idea, run the other way."

What is your unrealized idea?

In a world where the masses are desperately trying to seduce the masses, segmentation and niche are increasingly important.  To be realized your idea doesn't need to be taken up by the masses, just a few who will love it and tell others about it.

I have been told my whole life that this or that won't work.  I have had many failures. My successes have often come from seeing value in situations that others disparage as worthless.

Is is time for you to dust off that idea, the one everyone you have shared it with, mocked?

"There is no standard price on ideas. The creator of ideas makes his own price, and, if he is smart, gets it." Napoleon Hill in Think and Grow Rich
Posted by Ian Berry at 06:22