What do you mean when you say 'traditional values'?

My conversations with my clients for almost 30 years have centred around 3 subjects, people feeling valued, people living values, and people delivering value.

I know that getting these 3 right for you leads to better results at less human and operating costs.

These 3 are the engine room of a central model that I help my clients to adopt in your own best way. 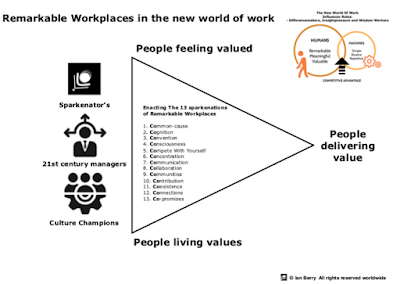 Concerning people living values my conversations with clients almost always begin with words and eventually we get to behaviours. As I explore in the short video below words on the wall are useless unless they are lived in the hall.

I do like the words below by the former Prime Minister of Australia Kevin Rudd which I have taken from his article The Complacent Country.

So what are our enduring Labor values? As a movement we are grounded in values of fundamental human dignity, that human beings are worthy of intrinsic respect for their essential humanity, not because of their material worth, while recognising that this core value is still far from respected universally and where many still see human beings as mere political constructs or as economic commodities.

We are also grounded in values of freedom in a land where working people were once far from free and in a world where freedom is still denied to many.

We are grounded too in values of justice, fairness or what we call a fair go for all– meaning at a minimum equality of opportunity for all and a decent safety net for those who collide with a brick wall at some stage of their lives and need society’s helping hand to preserve their basic human dignity and that of their families.

We also believe in values of opportunity, prosperity and enterprise so that through hard work, innovation and achievement women and men can build their own futures and reach for the stars of their own imaginings.

We believe equally in values of empathy, compassion and human solidarity– the “other-regarding” elements of our human nature – which cause us to extend a helping hand, not just through random acts of private charity, but also through properly informed public policy, to support those in poverty, hardship and distress because we share with them the bonds of common humanity.

We are anchored as well in values of family, community and nation-building, as the natural antidotes of unfettered markets, which when left unrestrained would happily destroy all in their wake.

So too are we now animated by values of sustainability so that Mother Earth herself can live to sustain us all with air to breathe, water to drink and a climate worthy of handing on to the generations that come after us – because we believe in inter-generational justice as well.

And finally, we believe in security, both at home and abroad, so that all can peacefully go about their work and their lives, free from the threat of fear, remembering with pride that it has been Australian Labor governments that have lead our country for the most part through both world wars.

These then are Labor values. Values of human dignity, of liberty, of equality, of opportunity, of solidarity, of family, of community, of sustainability and of security. They are not only Labor values. They are also Australian values. And they are universal human values. In Australia, it was also the Labor movement that grafted many of them  deep into the Australian soul. There was nothing about “a fair go” in the values 19th century colonial Australia. We the Labor movement put it there.

The conservatives will try to own some of these values – through their partial embrace of concepts of human dignity, freedom, family, opportunity and security. But when did you last hear conservatives talking about a fair go, about solidarity, about community, about nation building or about sustainability.

For them, these are a foreign language – almost a foreign country. Whereas we believe in the full monty.

There is a deep philosophical reason for this. For all our faults as a movement, we believe that human beings are designed not just to be self-interested. We also believe that a fulfilled human life is both self- regarding andother-regarding.

Conservatives  regard this is inherently contradictory. But we have sufficient grounding in reality, and sufficient  “audacity of hope”, to believe that they are not, and that indeed these values are mutually complementary, mutually reinforcing, mutually tempering  and deeply empowering of both the individual and society, of both family and community, of both nation and the world, of both human beings and the natural order.

Our philosophical view is that values that are exclusively selfish are ultimately self-destructive. Indeed that is the essential nature of unfettered capitalism – or what the theorists call “creative destructionism” – so much so that time and again through modern history we the Labor movement have been  called upon to rescue market fundamentalism from itself, most recently in the Global Financial Crisis. It is not, therefore, simply a question that ourvalues are different to the conservatives. They are. It is because these different values go to a fundamental philosophical principle concerning the absolute core of human nature and human responsibility.

The conservatives seek deliberately to deny an essential part of our common humanity – namely other-regardingness. They do this in order to advance individual greed, however they may try to mask it, as their unfettered project. This reached its apogee with Hayek’s market fundamentalism, later embraced by Thatcher, Reagan and Howard’s “Work Choices.” It also carried with it a reckless disregard for where this ideology ultimately leads in the destruction of people’s intrinsic dignity, their families, their communities, their economies, cultures and even their planet.

Conservatives also seek to ‘externalise’  any other-regarding values as if they lie naturally beyond the proper province of government –  as if they are at best a matter of random,  personal ethical discretion.  This indeed is the conservative world of “noblesse oblige” rather than systematic social justice.

Yet in privatising these values, conservatives also place us in collective peril when people find themselves ravaged by the untrammelled forces of an unfettered free market. Which is why working people inevitably react with anger towards the political system if and when these most basic and inclusive values are traduced by forces beyond their local control.

The Labor Party, by contrast, has always sought to ‘internalise’ these other-regarding values within the politics and economics of the nation. We see the intrinsic dignity of labour, of families and communities; the principles of social justice; and the imperatives of the planet as demanding a public policy response, not just as an occasional act of private, discretionary charity. This is why our values are so different from the conservatives, And this is why we should be proud of the difference.

What do you mean when you say traditional values?

How well are people in your workplace living your values?

Is there a strong alignment between the values your workplace espouses and the personal values of your employees?

In a workshop with CEO’s in 1990 I declared people management dead and that the new management was all about processes.  There were a lot of...