Where have all the people of character gone?

The rehumanisation of leadership and management part three. Part one is here. Part two here. 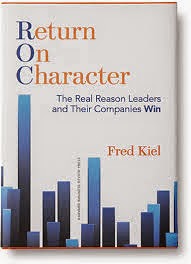 This is the book I'm studying at the moment.

It's a book I will soon be placing on my recommended reading list because it's not just a good read, it's evidenced based and one of the few books about who leaders are and can be rather than the normal focus on doing.

I particularly liked chapter 7 which the author calls a workshop. This chapter is very practical and has some great flow charts to facilitate step by step action.

You can get this book here.

As the Insead paper which inspired this series of posts, and referred to in part two says, one of the world’s most pressing issues is a crisis of leadership.

Character is at the heart of overcoming this crisis. I offer the following from Sparkenation 10 in my Changing What's Normal book Where have all the people of character gone?

Normal
Heavy storm clouds stay hanging over business, religion, politics, sport, and the media. Almost daily many so-called ‘icons’ are continuing to have their character questioned. These clouds always produce rain and wash away the ‘stars’ like twigs in a river.

Like never before the world needs ordinary people of character to stand up and be counted because many of the people leading us don’t understand leadership, have sacrificed their character in their quest for power, and in some cases, their behaviour threatens our very lives.

Recently the father of a good friend passed on. He was a man of character and an inspiration to my friend. His passing caused me to reflect on my own father who passed more than a decade ago.

Like my friend’s father, my dad never had his name up in lights too often but left a legacy to be proud of in his world nonetheless. I miss him. Dad was a man of character. We never always saw eye to eye. It was the words of the Mike and the Mechanics song In the Living Years that urged me to settle my differences with Dad not long before he died.
“It’s too late when you die”, the song says, “to admit you don’t see eye to eye.”

Towards the end, Dad came to hear me speak. Before I began he announced publicly: “I probably won’t agree with everything the speaker says this morning, but I am proud that he is my son.”

Be a person of character. You are needed like never before.
Ian

PS My Leadership Momentum Online Learning program is all about being a leader, not just doing leadership. Until 31st May 2015 you can get the program, have 24/7 access for one year, plus participate in the group Q & A and mentoring sessions that I conduct every first and third Monday's except January, all for just $27. Take up this offer here.
Posted by Ian Berry at 07:41