Imagine you’re told that a great guru has something vital to tell you.

The guru lives at the top of a mountain – as gurus do.

You cross deserts and crocodile-infested rivers before climbing the rugged slopes to reach him.

But instead of looking you in the eye and spouting wisdom, the guru holds up a big sheet of cardboard with lots of tiny writing on it.

He expects you to read all the words.

This is difficult because, while you try to decipher the meaning, the guru looks at the cardboard himself and simultaneously seeks to explain it.

You don’t know whether to focus on what the guru says or the written words.

Eventually you give up trying to read – and give up listening to the guru.

By now you don’t think he really is a guru – and you’re almost asleep.

INJECTING LIFE INTO PRESENTATIONS IN THE TECH WORLD

Alas this experience is much the same as when you sit through a poorly planned presentation with a bad set of wordy slides. 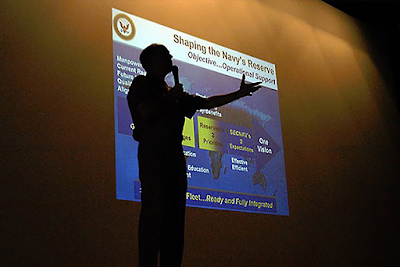 Presenters who do the equivalent of this to their unfortunate audiences may know masses of useful stuff.

But little enlightenment usually takes place – and, in the end, such presenters undermine their status as potential gurus.

This happens with particular frequency to audiences in high-tech industries.

I know because I’m increasingly asked by those in high tech industries to rescue them and their unfortunate audiences.

It’s a pleasure and privilege to do so, especially as technical experts frequently prove to be quick, keen and delightful improvers with important things to say.

But while they’re not typically what you might call “natural” presenters, techy folk like to know useful formulae, quick tips and simple guidelines to put them on the right track – and they often surprise themselves with how well they can put it all into action.

FEWER WORDS AND MORE WITH PICTURES

Here’s the key tip for everyone who wants to avoid inflicting bad slide presentations upon their audiences.

As a real guru on presentation might say: Too Many Bullet Points Kill.

Ask yourself, how many words are there on the front of a great movie poster that you remember – or a great book cover or a great pop album?

A great slide can often help you get your message across in a similar way if it’s largely pictorial.

If you look closely at the picture below you can see a speaker showing slide of a movie poster with just one word – “Jaws”. 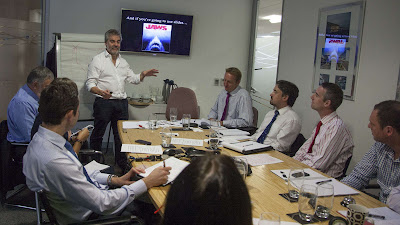 One emotive image (in this case a set of fierce set of shark teeth) enables a speaker to grab attention visually and say something verbally at the same time without overloading audience members and while looking directly at them.

If you need to convey a lot of factual information, make a self-contained written handout that everyone can read through afterwards when you’re not talking to them at the same time!!!

A good graphic slide doesn’t need to be self-contained, because you can add information verbally as it’s examined.

But a good handout must be self-contained, so it can be understood by audience members on the train or plane on the way home.

If the graphic slides in your presentation are memorable, audience members will understand the handout all the better.

THE LESSON OF ONE EFFECTIVE PICTORIAL SLIDE

Let me tell you about one single effective slide from a colleague in the Professional Speaking Association, Derek Williams.

Derek is a fantastically positive person who has built an organisation designed to give positive feedback to those who deserve it.

Derek also reckons many companies are more geared towards dealing with complaints than to receive praise.

In his presentations, Derek conveys this with just one slide. 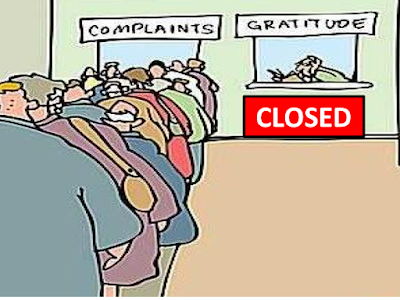 It just takes a quick glance at the slide, with a short verbal explanation to get point!

WOWING THEM WITH POSITIVITY 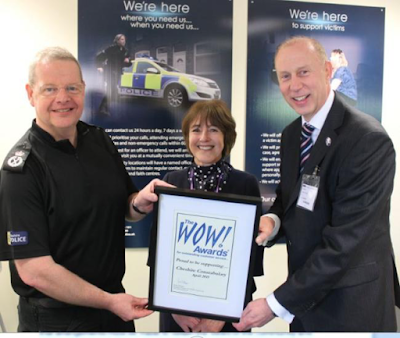 It helps deserving organisations and their people to avoid the problem of too many complaints and not enough praise where its due.

This is good for morale, engagement and productivity.

There’s more at: the wow awards.

WOWING THEM AT THE TOWER OF LONDON

If you want to know more, there’s a chance you can get a ticket to a hugely positive WOW! Awards ceremony at the Tower Of London on 30 November. 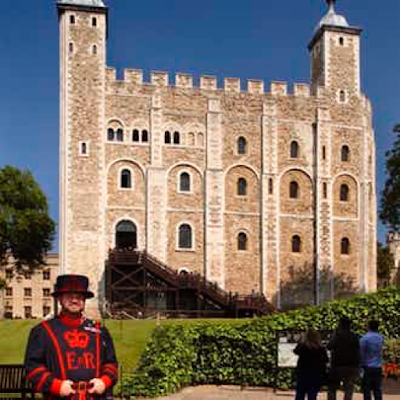 If you’re interested in taking advantage of this possibility, email: michael@michaeldoddcommunications.com

Warning: there will be a lot of positive “wow” stories at the Tower.

This could be a shock to the Tower Of London itself, as the venue is better known for less positive things like hanging and torturing.

But it is a place of intriguing stories.

And stories should make up a chunk of what your presentation contains – ideally supported by largely pictorial slides, or no slides at all.

Telling the right stories or informing people about real life examples is a great way to enliven presentations.

If your team would benefit from knowing how to do this, you can book a keynote speech for your conference on “Becoming Inspirational Communicators”.

And to ensure you and your team fascinate your audiences – rather than kill with too many bullet points – you can book master classes or one-to-one sessions on “Presenting With Confidence, Impact And Pizzazz”. 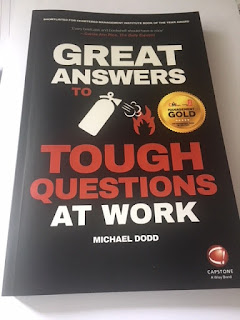 Free chapter and more here.
Posted by Ian Berry at 08:00