5 ways to get away from The Greedy Bastards

In my country Australia bastard in the right context can be a term of endearment. Not in this article.

Why? Economic growth and the pursuit of it is killing us (think oil, data, privacy, elections, you name it), and our planet.

One of my heroes is Sir David Attenborough.

He says “Anyone who thinks we can have infinite growth on a finite planet is either a madman or an economist.”

And yet growth dominates the language of our politicians and business leaders.

Growth is high on the agenda of BREXIT. As I write it’s looking like BRINO (‘Brexit In Name Only’)!

Just ask the people of Greece. And Italy. And Spain. Ask anywhere!

In particular be aware of greedy bastards wearing suits of doing good. Wolves in sheeps clothing for sure.

BREXIT was a dumb idea in the first place. It smacks of blaming your next door neighbour for the weeds growing in your garden.

And Trump. Don’t get me started. He is greed personified. His charade will end in tears and America will take a generation to recover.

I’ve got everything crossed that he doesn’t take us all into demise.

This is all one reason that I’m focused on thriving in my professional practice rather than growing. I also want to get away from the greedy bastards.

I admit I’m towards the end of my tilt. Nevertheless I’m a decade into the thriving business.

I began in 2008 albeit then, unwillingly.

The 15th September 2008 collapse of the investment bank Lehman Brothers was arguably the peak of the 2007/08 Global Financial Crisis.

I was going gangbusters then. I was traveling all the time and doing over 50% of my work outside Australia. The greedy bastards in the financial system brought it all to a halt.

I went back to surviving and gradually moved to thriving. I set goals to thrive not necessarily to grow. And I created systems and processes to ensure sustainability regardless of what the greedy bastards do or don’t do.

There’s strong evidence of course that our financial system is still a shambles.

Here in Australia our financial system is currently under the microscope via a Royal Commission.

Commissioner Kenneth Hayne's interim findings take your breath away, including he says “greed is the root cause of bad behaviour in financial advice.” 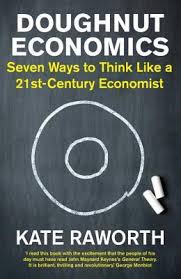 The good news is that there is an economics that’s good for everyone as Kate Raworth explores in her wonderful book Doughnut Economics.

While we’re bringing in the new financial system we need to beat the greedy bastards.

Greed is defined here as selfish want for something beyond one's need.

And typically greed is associated with wealth or power.

Let’s talk about thriving, living in harmony, leaving the earth better than we found it and acting on this talk.

2) Let’s stop talking about the economy and instead talk about society.

A good rule before making any major decisions is to ask “How will this be good for my grandchildren?

3) Lobby Governments to ditch GDP and other useless measurements

This idea comes from The Rules ideas into post growth.  They say:

"We could start by ditching GDP as an indicator of success in favor of a more balanced measure like the Genuine Progress Indicator, which accounts for negative “externalities” like pollution and material depletion.   We could roll out a new money system that doesn’t pump our system full of interest-bearing debt. And we could start thinking about putting caps on material use, so that we never extract more than the Earth can regenerate.”

4) Live within your means

Global Debt is about $250 trillion of which approximately a fifth ($50 trillion) is household debt.

If not immediately begin to take corrective action.

Recently my wife and I updated our wills and created powers of attorney our children had to sign. My daughter asked if she would be left with any debt. The answer is no yet it is a good question to ask.

The ABC News in Australia stock market report by Alan Kohler makes me laugh a) he has a sense of humour and b) listed companies here make up about a third of the economy.

The real economy, mostly made up of small to medium enterprises, hardly ever rate a mention.

The stock market is licensed gambling. I don’t want people running companies financed by gamblers (shareholders) to have any influence in my life therefore wherever possible I buy from non-listed companies.

When I do buy from listed companies I’m always endeavouring to ensure that the companies are purpose not profit driven, are known for their ethics, and are genuinely being good citizens.

“Blasphemous is the dogma that greed is godly and markets are sacred” say Frederick Bird and Henry Mintzberg in their great article Nailing Corporate Reformation to the Door. 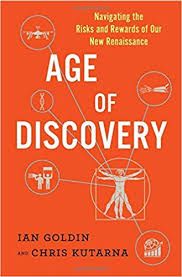 PS I highly recommend the work of Ian Goldin and Chris Kutarna.

Greed and greedy bastards in my view were part of the modern dark ages which preceded the new renaissance explored in this book.

Goldin and Kutarna compare discoveries of the great European Renaissance (1450 - 1550) to the New Renaissance happening now (since 1990).

At around the 11 minute mark in Chris Kutarna's video below he talks about the irrelevance of GDP in today's world.