What is Freedom of Speech? 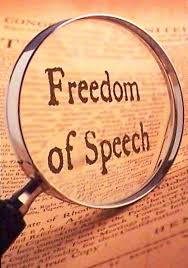 I notice a lot of chatter about Freedom of Speech in the light of Trump being permanently banned from Twitter.

For me the United Nations Declaration of Human Rights is pretty clear.

Everyone has the right to freedom of thought, conscience and religion; this right includes freedom to change his religion or belief, and freedom, either alone or in community with others and in public or private, to manifest his religion or belief in teaching, practice, worship and observance.

Everyone has the right to freedom of opinion and expression; this right includes freedom to hold opinions without interference and to seek, receive and impart information and ideas through any media and regardless of frontiers.

(1) Everyone has the right to freedom of peaceful assembly and association.

(2) No one may be compelled to belong to an association.

Nothing in this Declaration may be interpreted as implying for any State, group or person any right to engage in any activity or to perform any act aimed at the destruction of any of the rights and freedoms set forth herein.

It's obvious to me that Trump and his supporters who stormed the US capitol building are in violation of this article, let alone other US laws and their own First Amendment of their constitution which for me is clear that nobody has the right to say or do whatever you want.

We all have the right to be who we are, to become who we are capable of becoming, and do whatever we want, yet never in ways that put others in harms way.

Become the wise leader you want to be.
Ian