For me the idea here in Australia of a possible Freedom of Religion Act makes my blood boil.

It seems to me that is a deliberate tactic by those who seek to discriminate against people who have different beliefs to them.

It's also seems to me to be about trying to give religion a place in our society it doesn't deserve. Think child abuse and the disrespect of women as just two reasons why religion should be a private matter.

Should you wish to have a faith that is absolutely fine by me. You are entitled to believe in what and whomever you wish. You are also entitled to speak freely about this in most parts of the world.

For you to say that something untoward could happen to me because I have a different faith or belief to you is self-righteousness and the stench of this hangs around forever. It crosses the line and lacks the love and compassion I expect to be first and foremost from anyone professing religious belief.

I think having a faith for some people has value. I think there are key distinctions between faith and religion and particularly the dogma and doctrines. They fail to benefit society and undermine the good some religious groups do. 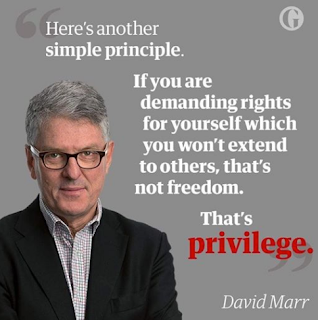 I stand with David Marr. You?

The gobbledegook of all this is illustrated perfectly in the Australian government's response to an inquiry they instigated for political appeasement reasons into freedom of religion. Download the response here.

That BS is in direct contrast to the beauty and simplicity of the Universal Declaration of Human Rights which you can read here.

Freedom of Religion already is alive and well in Australia at least.

We should stand strongly against any changes of law that give any group of people rights that are not available to all.