Listen directly to the podcast version of this post here.

Here's part one about value delivery.

Much has changed since I first left the corporate world in 1991 and set out on my own as a mentor for business owners and leaders.

One of the actions that I took early on was to declare management dead. I received mostly negative feedback apart from a handful of people.

As I look back I’m glad I took what was then a very counter to conventional wisdom position. It helped to establish myself as a contrarian thinker which is still one of the reasons the right people for me come to me today.

I’d long felt back in 1991 that the old command and control management, a hangover from the industrial revolution, was actually bad for people.

Now sure command and control has its place in life and death matters. As a general rule though management of people is long past its used by date.

Even Peter Drucker, the so-called Father of management, was on the record as saying that the task was not to manage people rather to lead people.

As far back as the 1920’s Mary Parker Follett had declared that the purpose of leadership was to create more leaders.

Yet the status quo held sway. Even today there are bosses hanging on to people management.

Leadership is also in crisis today. Many religious, political and business leaders are giving it a bad name from their complete failure to lead us.

So in my view alternatives are much needed. In the research and writing of my Remarkable Workplaces book I put forward the alternative of Sparkenator which includes a special kind of leadership, and 21st century manager and culture champion. 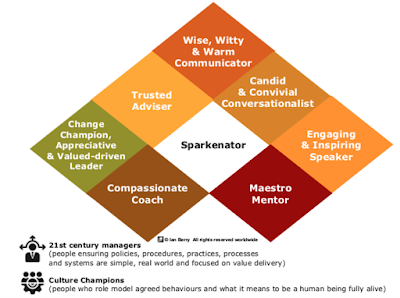 The seven relationship enhancement roles of a Sparkenator plus the roles of 21st century manager and culture champion are all vital for the success in the modern workplace.

Meetings should be conducted as part of learning and development or standalone that enable people be better, wiser and more valuable in these roles and to increase the number of people capable of fulfilling these roles.

My research and work with clients has led me to conclude that there are 3 essential gifts or talents that I recommend should be unearthed and enhanced for each of the 9 roles so this is very much a long term endeavour.

I strongly recommend that should you not have the teaching expertise in house then you must invest in those people who have both the capability and the caring capacity so this is also a long term investment in people development.

Below are the gifts to unearth and enhance. 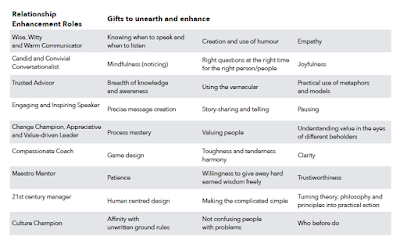 Conduct an audit of where you’re at in your workplace with these gifts and design a program to progressively raise each to a level of remarkable over the next year or so.